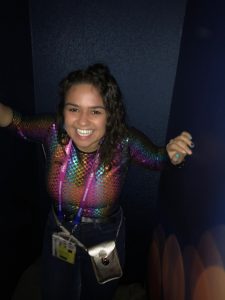 Rhonda Teeny, a Portland, Oregon native, has always been intrigued with Entertainment – from making short films as a child with her two older brothers, to moving throughout the United States to pursue creation. After receiving a degree in Communication and Political Science at Santa Clara University in Northern CA in 2017, Hollywood called her south. In two years she coordinated for three departments of a tech-media startup (Artist Services, Content Development, Acquisitions), AP’d for unscripted television (including a talk show pilot, a live-reunion, a dramatic reenactment, and a digital competition mini-series), and PA’d (on site) for film festivals such as Sundance, Palm Springs International, and Angaelica. At the beginning of 2019, she fulfilled personal assistant duties for industry professionals (festival directors, celebrity personal-trainers, indie film producers), and, over a two-month course ending in July, Rhonda became certified to teach 26+2 Yoga.

She has long been recognized for her dedication, ingenuity, positive attitude, and team leadership skills and she is grateful for all of her experiences. Having just relocated to the east coast, Rhonda is excited and delighted for new opportunities. Look out, New York!